What makes this program special?

For me the thing that makes this program special is that not only we receive knowledge from the lectures, but also we get the opportunity to learn how the sports business work from an inside perspective. Another great thing is the connections that you can make during the program.

Why did you choose this program?

I chose the program because I saw the opportunity to upgrade my academic knowledge and to see from the inside how sports business works. Also, a major part for me was that the program is organized by Euroleague Basketball, which is an amazing organization and the best basketball league in Europe. I was, I am and I will be for the rest of my life a huge basketball fan. So, the fact that the best people from basketball business are involved in this program was a big factor for me to choose this program.

Would you recommend this master’s program and why?

I would recommend this program to everyone, as I do it all the time. Not only to people who are interested in sports business, but to everyone. Lessons are great! Case studies are great! It is great that it is online, so you can organize your time even if you work or have family or have other things to do in life. Also, one of the best things is that you can expand your business network a lot and of course meet great people and make friends with them.

“During the program, the best support came from my colleagues, we constantly supported and helped each other every day and we didn’t let anyone fall behind.”

Tell us about your highlights in the program?

For me the highlights of the program were the first session in Barcelona at Euroleague Basketball headquarters and of course going to the Turkish Airlines EuroLeague Final Four.

Which 3 words would describe your experience with the master’s program best?

Who supported and motivated you the most on your journey?

Goran Sasic motivated me to start the program, then later on my best friend was a big support for me. During the program, the best support came from my colleagues, we constantly supported and helped each other every day and we didn’t let anyone fall behind. I can say that if I could pick on my own who I wanted to be in my class, I could not have made better choice.

Which transfer of knowledge caught your complete attention?

The best lecture in my life was one during the Final Four. It was the lecture by coach George Raveling. This lecture left me speechless, when I heard that he would be one of the lecturers during the Turkish Airlines EuroLeague Final Four I could not believe. I still remember everything he said and the many things he taught us that day. I still use those lessons in my private and business life.

Tell us about the Turkish Airlines EuroLeague Final Four?

One of the things on my bucket list was going to a Turkish Airlines EuroLeague Final Four. My first Final Four was the one during program, in 2012, in Istanbul. Having the opportunity not only to go and watch the games, but to see everything that was going on behind the scene was amazing. Not to mention that final game was decided by points in the last second of the game. Me and my colleagues finished on the floor celebrating with the Olympiakos team. That is something that you experience once in a life time.

Tell us about the Alumni dinners at the Turkish Airlines EuroLeague Final Four?

I’m just going to say we had and still have a lot of fun. During the dinners, we talk about lectures, tests and learnings for a short period of time, after that, well, we replace books with some more interesting things and enjoy the rest night.

Tell us about the Alumni Network – are you doing business with any Alumni?

Unfortunately, I don’t work with any of them, yet! We are still in constant touch and communication, we see each other from time to time. Honestly, with some of the guys I talked about doing business, but it didn’t happen yet. I’m sure it will happen in future.

Tell us about your internship – did you get it yourself or did someone help you find it?

Tell us about the job you were in before studying the master’s program, and the job you have now after you finished the course?

Before I started program, I was unemployed. During the program I met many people from the basketball world and started to make connections in order to get an opportunity to work with them. After the program, I got the opportunity to become an Euroleague Basketball delegate in Serbia, a job that I did until last year. A couple years after that I got a job in Serbian Basketball League. Now, I’m working in BC Crvena Zvezda, which for me is a dream come true, to work in such a big basketball club and organization. From this point of view, I can say that if it wasn’t for master’s program, I would never be able to go this amazing way in my career.

Previous story
Ibrahim Erkan - The program gives you a better perspective from the eyes of the organizer and the business aspect of basketball in particular but all sports in general.
Next story
Anna Montanana - The relationships you create with the rest of the students from different nationalities and backgrounds is very special.
HOME
PROGRAM
ALUMNI
ABOUT US
CONTACT US
INFORMATION FOR
Prospective Students
Alumni
For non-Eu / EEA countries
Tuition Fees
Required Documents
QUICK LINKS
360 Degree Education
Online Modules
In-Person Sessions
Study Timeline
Lecturers
FOR MORE DETAILS
Mantautas Rackauskas
Vytautas Magnus University
SportsBusinessMBA@vdu.lt
Miguel Ferreira
Euroleague Basketball
miguel.ferreira@euroleague.net 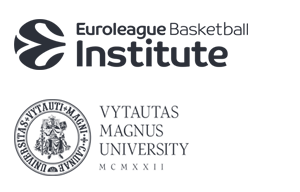